KW: Larry Greenberg asks: What’s it like writing for South Park? Is Cartman a jerk off-camera?

BH: Oh, yeah, yes he is. [Chuckles] No, I’m basically helping thoseguys out with their ideas, but I don’t actually sit down and writeany stuff with them. The way I contribute is basically by just sitting in a room pitching ideas to Trey and he runs off and writes it. It’s a great process that’s a lot of fun and that I learn a tremendous amount from. 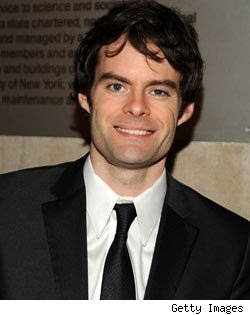 The “Cloudy with a Chance of Meatballs 2” Interview

Known for his uncanny impersonations and a biting sarcasm delivered with an eviscerating deftness, Bill received Emmy nominations in 2012 and 2013 for Outstanding Supporting Actor in a Comedy Series for his work on the show. He won an Emmy Award in 2009 for his work as a producer on Comedy Central’s “South Park.”

On the big screen, he enjoyed a full slate of film work in the summer of 2007 that included Knocked Up and Superbad. The very next year, he found great success as Jason Segel’s compassionate step-brother in Forgetting Sarah Marshall. He also delivered memorable performances in Pineapple Express and Tropic Thunder. In 2009, He appeared in Night at the Museum: Battle of the Smithsonian and Adventureland.

Last year, he co-starred Will Smith and Tommy Lee Jones in Men in Black 3, which grossed over $624 million worldwide. He’s also voiced several animated characters in Cloudy with a Chance of Meatballs, Turbo, Ice Age: Dawn of the Dinosaurs, Doogal, and Hoodwinked Too! Hood vs. Evil.

Bill lives in Los Angeles with his wife, filmmaker Maggie Carey, and their two daughters. Here, he talks about his latest outing reprising the lead role of Flint Lockwood in Cloudy with a Chance of Meatballs 2.

Kam Williams: Hi Bill. I’m honored to have this opportunity to talk with you.

KW: I loved Cloudy 2. How was it being Flint Lockwood again?

BH: A lot of fun. I don’t feel like the first one ever ended. Because the filmmaking process is so long, you kind of go right into the second one.

There was probably a year or so lag time for me, but it’s really cool. I love it.

KW: I got a lot of questions for you from fans, so why don’t I jump right into them. Harriet Pakula-Teweles asks: How different is the preparation for an animated versus a live-action role?

BH: I would say the biggest difference is that you’re just in a studio by yourself when you’re making an animated movie. You don’t have anybody to play off of.

KW: Marian Greenberg asks: Do you think it will be possible to teach the foodimals to befriend instead of fight humanoids so they can all live happily ever after in peace?

BH: Marian, you’ll get your answer when you see the film.

KW: Marian also says she thinks that, if there is a Cloudy 3, Flint should save the world by changing takers into givers. Do you agree?

BH: I can’t say, because I don’t exactly understand what she means.

KW: Kate Newell says: Bill Hader is a god in our household. SNL is the only show we watch together. She’s wondering how many takes you needed to do Stefon without totally cracking up.

BH: Aww, thanks, Kate. Well, on SNL you only get one take. And it always happened. And I was never once able to keep a straight face.

KW: Let me ask you about leaving SNL. Are you feeling any regrets or any pangs of emotion, especially right now since the new season is about to kick off?

KW: Not really. I’m not sad, just excited to watch the show and see what the new people are doing. I already watched some of it online and it’s really good.

KW: Alison Kruse What advice do you have for a novice improv student?

I just tried out for my school’s improv group and didn’t get in this time around.

BH: Oh, don’t worry, that’s totally fine, Alison. You’re on your way with the first step, which is dealing with failure. You’re going to have to deal with failure constantly. The best thing to do is to get out in front of an audience as much as you can, and learn from the experience. Steve Martin wrote a book called “Born Standing Up,” which is really great. He talks about how he kept a notebook on his act about what did and didn’t work. It’s a process. It’s not like you get up on stage and you’re immediately a genius. It takes a long time. So, don’t be discouraged.

KW: Kim Lister asks: How did you come up with the character Mr. Hollywood for the James Franco roast? It was hilarious!

BH: Oh, that was created with my Stefon writing partner John Mulaney. I wanted to do a character that could talk about various things. And I asked what if I came out as the embodiment of Hollywood? That attitude is something I like to do. And then, yeah, John and I wrote it.

KW: Kim also asks: Who was your favorite sketch character to play on SNL?

BH: I love playing Herb Welch, the old reporter who hits people in the face with the microphone.

KW: Amy Lister and Patricia Turnier ask: Do you have any advice for an aspiring comedienne who’d like to make it onto SNL?

KW: Marcy Held asks: What was it like growing up in Oklahoma? Who were some of your early influences? What did you watch when you were a kid?

BH: Growing up in Oklahoma, there wasn’t much to do. Play sports, do a lot of drugs, or read and watch movies, which is what I did. When I was a kid, Monte Python was big. And early Woody Allen movies.

KW: Marcy would also like to know whether you always wanted to be a performer?

BH: No, I was into writing and directing. I was a bit of a reluctant actor. I would always ask friends to shoot or direct their movies, but then they’d want me to be in them.

KW: Larry Greenberg asks: What’s it like writing for South Park? Is Cartman a jerk off-camera?

BH: Oh, yeah, yes he is. [Chuckles] No, I’m basically helping those guys out with their ideas, but I don’t actually sit down and write any stuff with them. The way I contribute is basically by just sitting in a room pitching ideas to Trey [Parker, South Park co-creator and voice of Cartman] and he runs off and writes it. It’s a great process that’s a lot of fun and that I learn a tremendous amount from.

KW: Attorney Bernadette Beekman says. You’ve done a lot of voice work in animated films. Not just Cloudy 1 and 2, but Turbo, Monsters University, Doogal, Ice Age 3 and Hoodwinked 2. She asks: When you are doing animation, do you want your character to resemble you physically?

BH: Not necessarily. You know, they have a video camera on you in the studio while you’re performing. And in the case of Flint Lockwood, I see a lot of me in him, like how I talk with my hands. So, sometimes they do it, but I never request it.

KW: Children’s book author Irene Smalls asks: Do you feel any special joy in bringing a children’s book to the screen, especially being a father?

BH: Yes, I do. I loved that book growing up. It’s almost like a little poem or fable. And I love being a part of bringing it to the big screen.

KW: A fan of the franchise asks: Do the watermelophants represent the increase in childhood obesity in America?

KW: Here’s another question: Do the mosquitoasts leave their stingers in and cause the spread of malaria? I’m amazed that anyone’s thinking that way about the film.

BH: [Chuckles] Yeah, I agree. And I don’t think the writers of the movie intended that deep an analysis.

KW: I’m not surprised since you have 1 and 4 year-old daughters. If you could have one wish instantly granted, what would that be for?

KW: The Anthony Mackie question: Is there something that you promised to do if you became famous, that you still haven’t done yet?

BH: I don’t consider myself famous.

KW: The Viola Davis question: What’s the difference between who you are at home as opposed to the person we see on the red carpet?

BH: There really is no difference other than my having some makeup on.

KW: The Anthony Anderson question: If you could have a superpower, which one would you choose?

BH: The ability to fall asleep.

KW: The Judyth Piazza question: What key quality do you believe all successful people share?

BH: Being able to deal with failure and being wired to pursue your passion because you enjoy the process of creating something, even if you aren’t living in New York or L.A. and work in a hardware store.

KW: The Kerry Washington question: If you were an animal, what animal would you be?

KW: The Gabby Douglas question: If you had to choose another profession, what would that be?

KW: Harriet: With so many classic films being redone, is there a remake you’d like to star in?

KW: What’s on the horizon for you, comedies like Superbad, Knocked Up, Adventureland and Forgetting Sarah Marshall?

BH: Well, I just did a couple of dramas, The Disappearance of Eleanor Rigby and The Skeleton Twins.

KW: Attorney Bernadette Beekman asks: What is your favorite charity?

BH: I’ve done stuff for Standup for Cancer which is great, but I don’t personally have one.

KW: Thanks again for the time, Bill, and best of luck with the film.