“Director Larry Greenberg says: Trey, I used a chainsaw to defend against zombies in my last film and it was difficult to get the splatter right. How did you guys handle that in Texas Chainsaw 3-D?

Trey Songz: The splatter? I don’t know how they did it, but when they did it, they did it right. I know that they used a real chainsaw when he cut through the door and throughout the whole film. I wasn’t scared, but I still thought to myself, “He does actually have a chainsaw in his hands!” So, if he wanted to cut through anything, he could” 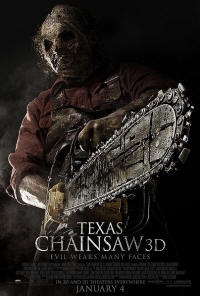