“Larry Greenberg says: Contagion has such an amazing cast, yourself included. Was there anyone in particular that you felt a strong affinity with whom you would like to work with again?

Sanaa Lathan: Well, the truth is, I only worked with Laurence [Fishburne], because Steven Soderbergh kept each of the movie’s storylines separate, although they’re obviously intertwined cinematically. So, all of my scenes were with Laurence.”

Sanaa Lathan earned a Tony Award nomination for her Broadway performance as Beneatha Younger in “A Raisin in the Sun,” a role she later recreated in the highly rated and critically acclaimed ABC production, alongside Sean “Puffy” Combs. Sanaa most recently appeared in the title role in the comedy “By The Way, Meet Vera Stark” in an extended engagement at the 2econd Stage Theatre in Manhattan.

Written by Pulitzer Prize-winner Lynn Nottage, the play chronicles a 70-year journey through the life of a headstrong African-America maid and budding actress, as well as her tangled relationship with her boss, a white Hollywood star desperately grasping to hold on to her career.  Lathan was previously seen on stage as Maggie in London’s West End in the critically-acclaimed, award-winning revival of “Cat on a Hot Tin Roof.”

Currently, she lends her voice to the character Donna Tubbs on Fox-TV’s animated series “The Cleveland Show.”  Her additional credits include Tyler Perry’s “The Family that Preys,” alongside Kathy Bates and Alfre Woodard; “A Wonderful World,” opposite Matthew Broderick; “Something New,” for which she received an NAACP Image Award nomination for Best Actress; and the FX Network series “Nip/Tuck,” for which she received another NAACP nomination.

Among Sanaa’s other feature film offerings are “Alien vs. Predator;” the thriller “Out of Time,” with Denzel Washington; the romantic comedy “Brown Sugar,” alongside Taye Diggs, Queen Latifah and Mos Def, which reunited her with Rick Famuyiwa, who also directed her in “The Wood.”  And of course everyone remembers how she wowed audiences and critics opposite Omar Epps in Gina Prince-Blythewood’s romantic drama “Love and Basketball.”

She received her first NAACP Image Award nomination, for Best Actress in a Motion Picture, for the romantic comedy “The Best Man.” The film, co-starring Morris Chestnut and Harold Perrineau, received rave reviews and is one of the top ten highest grossing African American films in history.

Kam Williams: Hi Sanaa, thanks for the time. I’m honored to have another opportunity to speak with you.

Sanaa Lathan: Oh, my pleasure, Kam. How have you been?

KW: Great, thanks. I told my readers and editors that I’d be interviewing you, and they sent in so many questions I’d like to get right to them. Larry Greenberg says: Contagion has such an amazing cast, yourself included. Was there anyone in particular that you felt a strong affinity with whom you would like to work with again?

SL: Well, the truth is, I only worked with Laurence [Fishburne], because Steven Soderbergh kept each of the movie’s storylines separate, although they’re obviously intertwined cinematically. So, all of my scenes were with Laurence.

SL: He was amazing! I would love to work with him again. 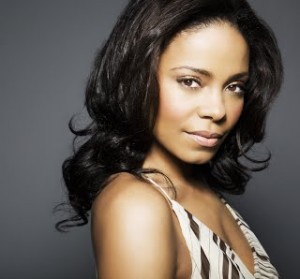 KW: The film struck me as very similar to Traffic except revolving around an outbreak instead of around drugs.

SL: Exactly! Here, the virus is the main character.

KW: Harriet Pakula Teweles says: Your role in ‘Vera Stark’ was a marvelous, breakthrough theatrical performance. It was a privilege to be in the audience. How does your preparation and performance change when you move from stage to screen?

SL: I feel that every role is different regardless of whether it’s on the stage or on the screen. The great thing about the stage is that you have a structured month-long rehearsal period where you’re going in every day. You have to have lots of run-throughs with theater because there are no second takes in front of a live audience. It’s very different with film. There, the preparation depends on the role and how much time I have. Each character speaks to me differently. I have to assess the demands of the role and what’s going to bring the character to life. So, I don’t have a set approach with film. But I’m always trying to get to a realization of truth with each character.

KW: Harriet also says: For ‘Raisin in the Sun’ and ‘Cat on a Hot Tin Roof,’ you took on parts that had been made famous by others. Did you study their performances in preparation?

SL: No, in fact, I made a point to not watch any of the movies. That is one of my rules. If someone has already done a role I’m about to do, I won’t watch the original until after I’m finished playing the role.

SL: Because I believe the subconscious is very impressionable. At least mine is. Whenever I take on anything where I might be tempted to emulate a prior performance, I try to go off the text in order to ensure a fresh interpretation.

KW: Attorney Bernadette Beekman says: I just saw you in Meet Vera Stark off-Broadway recently. You are great on screen and in theater. How do you think growing up in show business influenced you during your formative years?

SL: Let’s see… I really don’t know, because I don’t know anything else. I was always around the arts. My mother [actress Eleanor McCoy] was in the original productions of Timbuktu and The Wiz on Broadway, and I was always in the way, running around backstage. And I was always taking art and dance classes. One good thing I do have is compassionate parents who understand my trials and tribulations because they’ve been through it before as well.

KW: Bernadette has a follow-up. Are you interested in directing?

SL: One day. I’m presently into producing. I have a partner with whom I’m developing some projects right now. Directing is something I might try further down the line. You never know.

KW: Editor/Legist Patricia Turnier asks: What African-American icon would you like to portray in a movie?

SL: I don’t think that way. I’m already living my dream having the opportunity to play Vera Stark, Maggie the Cat [in Cat on a Hot Tin Roof] and so many other wonderful characters. Instead of thinking about what icon I’d like to play, I am looking to be challenged. I want to be scared, I want to work with great actors and directors, and I want to tell stories about women that will inspire people. It’s more about the quality than any particular person I’d like to portray.

KW: Patricia also says: Many young people think they can make it in the movie industry without an education. You earned a master’s degree at Yale University’s School of Drama. Was it helpful to you to have earned that degree?

SL: Many very successful people have made it without an acting background and some are even proud that they’ve never taken any acting classes. But I wanted to be the best that I could be for me which meant studying drama at Yale where I got a great education in theater after I was fortunate enough to be admitted. People may know me from films, but theater is my first love. I did about 35 plays before I even landed my first screen role. I’m very comfortable on stage, and theater is not something you can just wing.

KW: Patricia asks: What was the best career advice you got from your father?

SL: Early on in my career, when I was frequently frustrated while going out for auditions, my dad [producer/director Stan Lathan] told me, “Don’t be discouraged if you don’t get a job. And always give it your best because people in the industry talk, and even if you don’t get that role, someone might remember you and hire you later.”

SL: No, I’ve been asked pretty much everything. [Laughs]

SL: All the time! In fact, I believe that “fear” is an acronym for “False Evidence Appearing Real” and that when you have a fear, it’s almost a signal that you have to do whatever it is you’re afraid of. What makes you grow as a human being is stepping outside of your comfort zone.

SL: I am. I’m definitely a happy person in general, but I cultivate that happiness. I think that to a certain extent happiness is a choice.

SL: This morning I was cracking up watching America’s Funniest Home Videos while I was jumping on my Rebounder, which is like my treadmill.

KW: Ola Jackson asks: What is your opinion of how reality-TV shows depict black women?

SL: I think there have been some positive portrayals as well as negative. One thing reality-TV is definitely providing for us is variety.

SL: I love going to the movies and getting Raisinets, a big tub of popcorn and a Coke. That’s definitely a guilty pleasure because I can’t be doing that all the time.

KW: The music maven Heather Covington question: What music are you listening to?

SL: I’m really feeling Beyonce’s new album. I like that a lot. http://www.amazon.com/exec/obidos/ASIN/B0050CQY1W/ref%3dnosim/thslfofire-20

SL: I don’t have a favorite dish, although lately I’ve been eating a lot of salad in preparation for the premiere. I can make a great gourmet salad like nobody’s business.

KW: The Uduak Oduok question: Who is your favorite clothes designer?

SL: Whatever looks good on me. [LOL] I have no loyalties in that department.

SL: It depends on the day, and on the moment in the day.

KW: If you could have one wish instantly granted, what would that be for?

SL: Wow! That question’s so good! That I could eat whatever I want and still be a size 4.

SL: I don’t know exactly how old I was, but I remember my mother playing Stevie Wonder’s “Song’s in the Key of Life” while I was sitting on the floor in our New York apartment. http://www.amazon.com/exec/obidos/ASIN/B00004SZWD/ref%3dnosim/thslfofire-20

KW: The Judyth Piazza question: What key quality do you believe all successful people share?

KW: Dante Lee, author of “Black Business Secrets, asks: ”What was the best business decision you ever made?”

SL: I want to be remembered as one who left behind a legacy of great art that entertained and uplifted the world.

KW: Thanks again for the time, Sanaa. I hope my questions weren’t too heavy.

KW: If you give me a good question to ask other celebrities, I’ll call it the Sanaa Lathan question.

SL: How about, “What excites you?”[Giggles]

KW: Excellent! I’m definitely adding it to the rotation. Best of luck with Contagion.

SL: Thanks for such a refreshing interview, Kam.