Larry Greenberg says: Owen, I love you in a purely non-gay way. When I see that you’re in a film, I know that it will be fun to watch. How do you move so seemingly effortlessly from a zany comedy like “Night at the Museum” to a more complex film like “The Darjeeling Limited”?

Owen Wilson: Thanks, Larry. Well, I guess it’s always about reading the script and knowing who you’re going to work with so you can make sure that even in the zany comedies you have it grounded in some sort of a reality in the world that you’ve created. So, I don’t find it that hard a transition. It might actually be harder for someone who just does dramatic stuff to do a comedy than for someone who does mostly funny stuff to do something more serious. I think it’s actually easier to do it that way.

Headline: Co-Stars Expound on Their Comedy Philosophy and Their New Flick

Born in Dallas, Texas on November 18, 1968, Owen Wilson has garnered widespread acclaim for his memorable turns in both mainstream and independent films. He most recently starred in James L. Brooks’ romantic comedy “How Do You Know,” with Paul Rudd and Reese Witherspoon, and in “Little Fockers,” opposite Ben Stiller and Robert De Niro. Among his upcoming projects are “The Big Year” with Steve Martin, and Woody Allen’s romantic comedy “Midnight in Paris.”

Owen’s string of box-office hits includes “Marley & Me,” “Rushmore,” “Night at the Museum” (1 & 2) and “Wedding Crashers,” co-starring Vince Vaughn. He also was in this critic’s #1 film of 2007, “The Darjeeling Limited,” a movie which marked his fifth collaboration with director Wes Anderson.

In 2002, Owen was nominated for an Academy Award for Best Original Screenplay for “The Royal Tenenbaums.” And his additional acting credits include “Starsky & Hutch,” “Zoolander,”  “Drillbit Taylor,” “The Wendell Baker Story,” “Shanghai Noon,” “Behind Enemy Lines,” “I Spy,” “Shanghai Knights,”  “Armageddon,” “The Minus Man” and “The Cable Guy.”

Born in Fairfax, Virginia on September 18, 1975, Jason Sudeikis is currently enjoying his sixth season as a principal ensemble cast member on NBC’s “Saturday Night Live,” following two years of his first serving as a writer for the show. Jason has also received rave reviews for his dozen appearances on NBC’s “30 Rock” as Tina Fey’s love interest, Floyd.

Kam Williams: Hi Owen and Jason, thanks for the time.

KW: I have a lot of questions sent in by my readers, so I’d like to get right to them, if you don’t mind.

KW: Danny Costa, says: Chump ask this question of Owen. Do you have any plans to do another small indie movie? Your early work is the best, bar none.

OW: Thanks, Danny. Uhhhhhhh, yeah, I mean I just worked on a Woody Allen movie that was kinda small. I guess that would kind of be considered an indie. I think that’ll be out in late summer or the fall.

KW: Editor/Legist Patricia Turnier says: Jason, what is your favorite impersonation to do?

JS: I like doing Joe Biden because he has such a very outgoing personality and because I get to wear fake teeth.

KW: Patricia also wants to know what’s your favorite SNL sketch to do?

JS: I really enjoy how the whole cast gets involved in the “What Up With That?” sketches. It’s a very fun energy when you have the majority, if not all, of the cast in one sketch, and the audience really responds to it.

KW: Patricia has a question for both of you. Who’s your favorite comedian of all time?

JS: I would probably go Eddie Murphy or Bill Murray.

OW: Yeah, those are good choices, although it’s easier for me to go with classic scenes with different people in them.

KW: Like the late comedians Sam Kinison and Rodney Dangerfield in “Back to School.”http://www.youtube.com/watch?v=Xfi4s8cjLFI

JS: Yeah, they were great in that.

OW: How about Zero Mostel in the opening of “The Producers.” That whole sequence was one of the funniest things ever.

JS: I don’t think there’s anything funnier than when Bill Murray’s sarcastic with anybody who’s being a pain in the ass. Nobody makes me laugh more.

KW: I thought the Bill O’Reilly impersonation you opened the show with a couple of weeks ago was great.

JS: I appreciate that. That’s very nice of you to say that.

KW: Larry Greenberg says: Owen, I love you in a purely non-gay way. When I see that you’re in a film, I know that it will be fun to watch. How do you move so seemingly effortlessly from a zany comedy like “Night at the Museum” to a more complex film like “The Darjeeling Limited”?

OW: Thanks, Larry. Well, I guess it’s always about reading the script and knowing who you’re going to work with so you can make sure that even in the zany comedies you have it grounded in some sort of a reality in the world that you’ve created. So, I don’t find it that hard a transition. It might actually be harder for someone who just does dramatic stuff to do a comedy than for someone who does mostly funny stuff to do something more serious. I think it’s actually easier to do it that way. 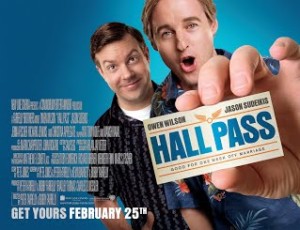 KW: Nick Antoine, a big fan of yours who has memorized every line from “Wedding Crashers,” says: I’ve heard that much of your acting is improvised. Do you just naturally have that droll sense of humor all the time?

OW: Well, yes… Somebody else was just asking us about that, and Jason was saying, which I agree with, that it isn’t where you’re letting the film roll and you’re just trying to come up with stuff on the set during the shoot. The improvising takes place maybe the day before or even when you first get the script, making notes in the margins like, “This could be something to try.” So, it isn’t so much improvising right in the moment, although that does happen sometimes, too. But it’s a lot more common that it’s the consequence of something you’ve been thinking about because you’ve been living with the character, the story and the script. For instance, do you remember my character’s unctuous pickup line in “Wedding Crashers” that went “People say you only use 10% of your brain. I think we only use 10% of our hearts.”

KW: Yeah, that was hilarious.

OW: Well, we’d already finished shooting that scene when I suggested adding the line to the director [David Dobkin]. He was like, “Okay, we can go back and work it in.” And you know what? I think that’s the way almost everyone I’ve come in contact with works. There may be some people who just always stick to the script, but most of us tend to come up with other ideas.

KW: Harriet Pakula Teweles points out that both of you guys are accomplished scriptwriters. She was wondering how hard was it for you to work on a film where neither of you contributed to the original screenplay?

JS: I was fine with it. I’m used to working with really great writers at SNL where I sort of learned how to tweak scripts so they make more sense to me emotionally or comedically, as long as the author isn’t super-militant. I actually look forward to that opportunity, so long as the original scriptwriter isn’t so, for lack of a better term, enamored with their words or idea. If I know they’re married to the script going in, I don’t mind respecting the dialogue. But I think a free and open approach is a better way to go.

KW: Jason, Bernadette wants to know if you’re a Kansas Jayhawks fan and if you’re really into basketball, given the way you’ve mentioned the team in sketches and how you’re shown shooting hoops in the opening credits on SNL

KW: Marcia Evans says: Owen, I am a fan of your wonderful movie “Marley & Me.” That film touched me on a few fronts: the love of animals, its showing the evolution and the growing pains of a relationship that led to marriage, and how adding children to the equation presents new challenges. I did not expect that film to tug at my heart strings as much as it did. The film made it clear that marriage is work. Marriage is about keeping love first whether it involves loving a person or an animal. She asks: Are you a dog lover? What breed of dog do you own?

OW: Thanks, Marcia. Yeah, I would say I’m a dog lover. I grew up with dogs, and I have a terrific pet that I’ve had for nine years, an Australian cattle dog, named Garcia. In fact, he had a cameo in “Marley and Me.”

KW: Howard Harris says: Owen, what film did you turn down and realize it would have been perfect for you?

OW: I’ve never had that happen to me. I think they approached my friend Woody Harrelson about Jerry Maguire, and he was like, “I don’t know about playing an agent.” But I don’t have any of those stories where somebody offered me a role which turned out to be something big.

KW: Owen, Will Cooper asks: How does it feel to have created a new genre of movie with those buddies you worked with on a number of your early films?

OW: I don’t know if they’re a new genre. They just seem like comedies to me. And I’ve just been fortunate to be able to work with a lot of people who are really good.

JS: Yeah, how are you doing? No one takes the time to just ask me how I’m doing today.

KW: Okay, how are you doing?

JS: None of your goddamn business! [Laughs]

KW: How about you, Owen? How are you doing?

OW: None of your business! [Laughs]

KW: Okay, on that note, let me say thanks again for the interview, guys, and best of luck with Hall Pass.

JS: Thank you very much.

To see a trailer for Hall Pass, visit: <span>http://www.youtube.com/watch?v=tvqbOPX3wBs